Robotics has been supporting production processes very successfully for several decades. More specifically, robots have been used since the 1970s, especially in the automotive, electronics, and pharmaceutical industries. Several types of robots have evolved in the process. From exoskeletons, which e.g. reinforce human strength for ergonomic movements, to automated guided vehicles (AGVs), i.e. mobile robots that are used in logistics centers to transport goods. However, by far the highest sales figures are achieved by stand-alone articulated robots aka “robot arms”. These robots, which most people think of when hearing the word robot, are versatile in today’s manufacturing, performing tasks such as machine tending, welding, soldering or assembling. This category can be subdivided into industrial robots (the heavy robot arms we know from car manufacturers), cobots (robots capable of working together with humans) and lightweight robots (smaller robotic arms).

The list of benefits that can be achieved through the use of robotic arms is long. Besides an increase in product quality through higher and constant precision, production lines can generate significantly higher outputs, resulting in a competitive advantage. Another benefit comes from the relief for their employees, who no longer need to handle heavy parts and do repetitive tasks. Consistent cycle times allow for better planning and there is practically no down-time, as a fully automated production line can run day and night. Ultimately, automation will lead to a significant reduction in operating costs. According to analysts, the robotics market is expected to grow from $76 billion in 2020 to approximately $176 billion in 2025. Depending on the study, a CAGR of around 15-20% is expected.

Robotic arms is still a low volume, high complexity sales environment. Although Universal Robots introduced to the world a more affordable, lightweight robotic arm, the complexity of the sales process and difficulties in reteaching among others limited the success. Sales are still dominated by industrial robots. The International Federation of Robotics (IFR) documents that 373,000 industrial robots were shipped and installed in 2019. Industrial robotics applications have only found their way into a few industries and mainly into large-sized companies such as automotive OEMs, although further industries and smaller companies could evidently benefit from the integration as well.

In our view the biggest challenges that hinder a widespread adoption of robotic solution at SMEs are as followed:

The next wave of robotic companies must overcome the outlined challenges. Simulation software, which simulates the use cases before the robots are finally ordered, allows to prove the use cases and is therefore a time and cost saving solution to reduce entry barriers for SMEs. Furthermore, we will need modern interfaces that allow easy integration of third party tools and enable robots to communicate in more depth with other machines on site. Simplifying the programming of robotic solutions with modern graphical user interfaces will further pave the way for smaller factories to enter the world of automation, as they won’t be depending on expensive experts.

There are two more key challenges that need to be overcome. Firstly, robot arms must become reconfigurable or adaptable to changing needs. Especially at SMEs, production processes change more frequently then, for example, at automotive OEMs or large pharmaceutical companies. Secondly, flexible financing and payment methods are needed to lower the entry barrier for SMEs. Robotic arms will help shop floor workers become more productive, allowing them to focus on value add tasks. However, SMEs therefore ideally expect no upfront costs for robots but a payment scheme similar to that of emplyoees. Emerging trends such as Robots-as-a-Service, where payment is for example linked to the usage hours, offer a great solution to this challenge and are a promising model in this area.

We believe the next wave of robotic arms is just around the corner. New applications will bring many advantages in a broad field of industries. We want to support startups that are leveraging these advantages, as we see high potential here for disruptive tech companies. A startup that tackles exactly these challenges is our newest member to the Freigeist portfolio, RobCo. 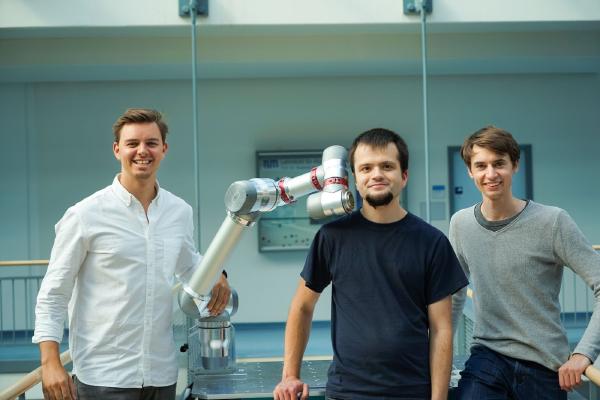 RobCo – The Robot Company manufactures the world’s first fully modular robot arms. The robots can be individually assembled and adapted within minutes. This can be done using a module library of up to 20 modules, each with different strengths and sizes. After configuration and deployment, the in-house software generates a digital twin of the robot, which can then simulate the application. RobCo thus offers a true plug & play solution in the field of robotic arms. Thanks to their modularity, RobCo’s robots offer real flexibility, as they can be quickly adapted or exchanged to optimally address manufacturing capacities. We are convinced that they offer some of the most crucial solutions for the arrival of the next wave of robotics, which is why we have decided to support the team through an investment.

We use cookies to analyze our traffic and to offer great usability. Show details